Pepsi is going to be releasing a phone in China.  I’m not even sure where to begin with this one.

From pop to phones.  It is certainly an interesting marketing strategy.

The Pepsi phone is known as the Pepsi P1 and will be an android device.

Now it won’t be bottled… I mean… manufactured directly by Pepsi.  They are partnering with a Chinese device manufacturer to usher in the age of soda phones.  Pepsi should try to sell this in the UK so that there could be a Vodafone Soda Phone.

The Pepsi P1 will have a 1080p screen measuring at 5.5 inches.  Powering this display is a 1.7GHz octa-core processor and 2GB of memory. 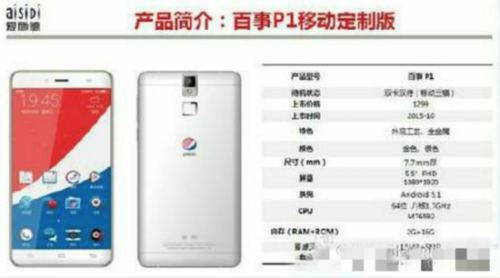 The Pepsi P1… that wallpaper is sharp

That actually sounds decent.  Now if only it tasted decent…

It should be interesting to see how the Pepsi P1 fares in the Chinese market.  Not only will Pepsi be going up against Apple and Samsung, but also Huawei, Lenovo, Xiaomi, ZTE, Oppo, OnePlus, and more.

Pepsi already has a foothold in China with Pepsi-branded headphones and other items like shoes.  They are relying on their brand with this one. According to Todd C. Frankel of the Washington Post, “Coca-Cola Co. did not return a call asking if it was getting into phone, too.”

Well darn, maybe we can hope to get a cool android-green 7-Up phone then.

Finally! A motto I feel good about.

Pepsi is going to be releasing a phone in China.  I’m not even sure where to...