Last week was the LG G4.  This week it is the HTC One M9.  Boy does it feel good to get these reviews out there!  Hopefully by the end of the year I’ll have every flagship covered.

Would I recommend it as a worthy upgrade or is it a disappointment and should you look elsewhere? 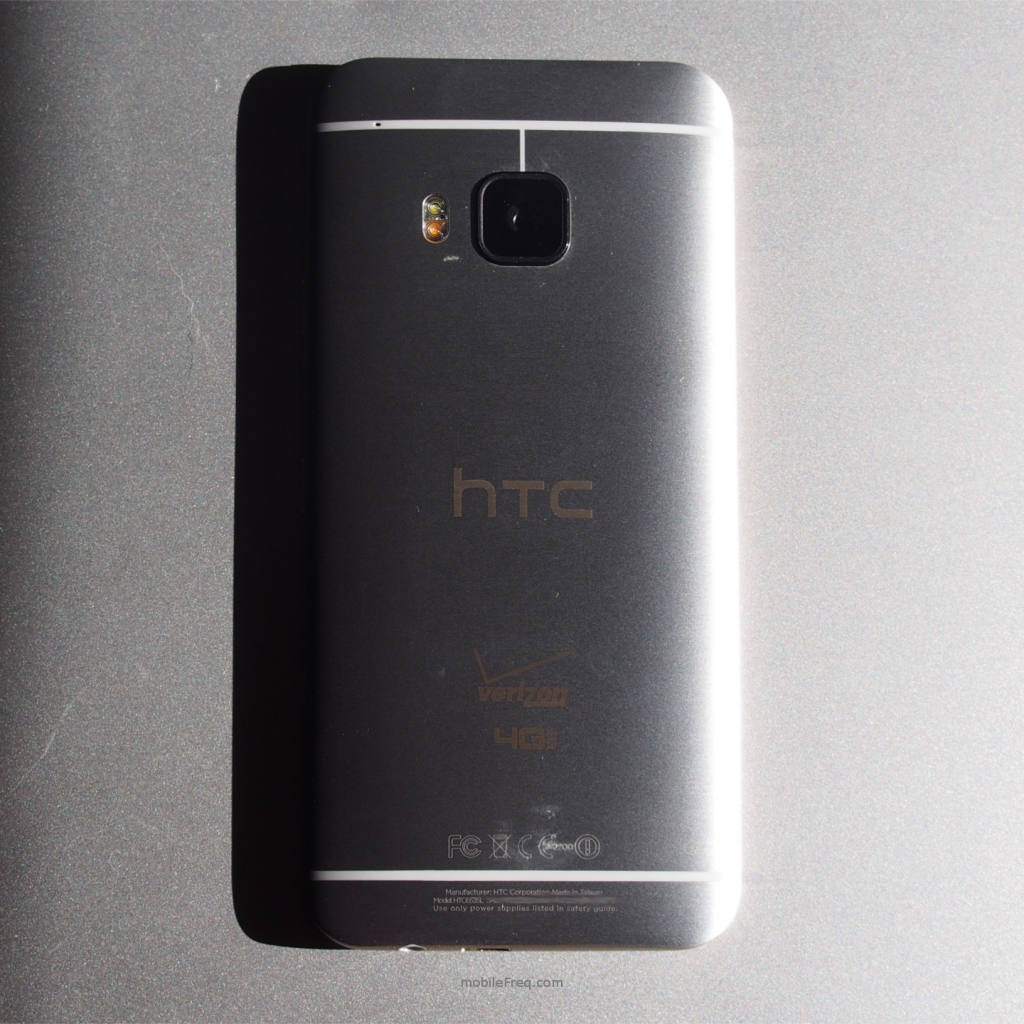 Like all of my reviews I’m starting off with the design because deep down inside we all want a device that looks stunning and will make peoples’ heads turn to check out what is in our hands.

The word that probably best describes the One M9 design is charming.  It has a very welcoming feel to it and isn’t as intimidating like other devices out there.  Another phone that presents you with this feeling?  The iPhone.

If you flip the One M9 over it actually looks mildly like an iPhone due to its top and bottom radio bands along with its all-aluminum body.

A few things to note though before criticizing HTC of copying Apple.

The HTC One M7 was the first smartphone that looked like this starting in March, 2013 and HTC continued the design philosophy to this very day with the One M9.  Apple caught up in September, 2014 with the iPhone 6.

Speaking of which, HTC marginally changed the design of the One M9 from its predecessor, the One M8.

Was this a good idea or not?

I’d say it was more of a “safe” idea in their mind because if they radically changed the HTC One it could have been a hit or miss.

One reason could be brand recognition.

Every iPhone pretty much looks like an iPhone.  They are easy to spot.  Maybe this is what HTC was trying to do with the new One series.  Make a few improvements and changes every so often, but still keep it “looking like an HTC”.

A rendering that took the internet by storm

Android Authority posted an article about renderings made by, Jonas Daehnert, a designer from Germany.  His idea of what the One M9 should look like (at the time) were brilliant.  It still screamed HTC One, but looked incredibly refined.  Notably the BoomSound speakers were pushed to the edges of the device and became blades, the black bar was gone, the front-facing camera shifted to the middle, and the back camera was flush with the back of the device.

Instead, HTC kept the mesh BoomSound speakers and the black bar that took up space.  They also had the rear camera protrude outwards which, to me, seems to break up the form of the device.  It feels out-of-place and like they slapped in on last minute.

Forgetting that the renders even existed the One M9 is still a great looking phone.  If you have never owned a HTC One then you will be in for a treat.

The brushed-aluminum back is incredibly premium and the overall feel is solid.  HTC’s One M9 has a bit of weight to it which is actually refreshing. 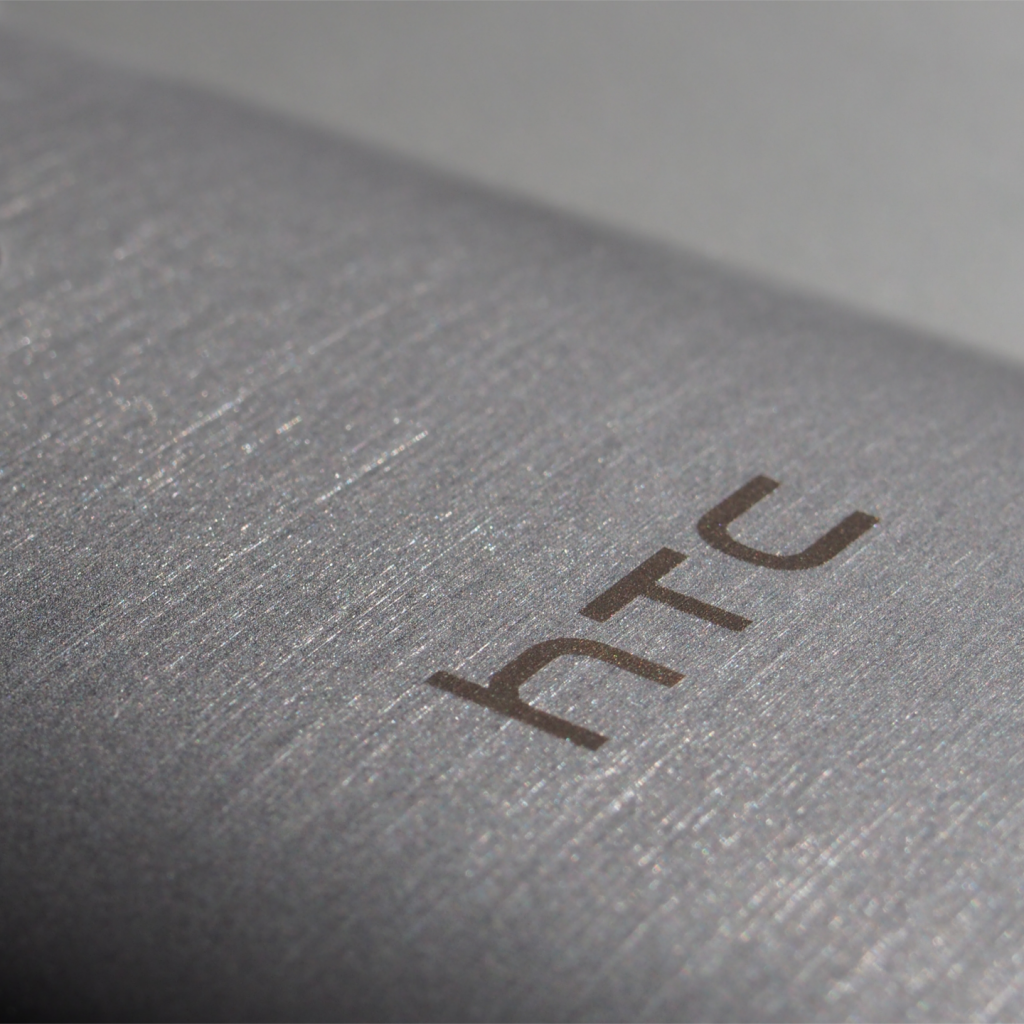 It is very simple and soft around the edges making it easy to hold.

The headphone jack is on the bottom along with an off-center USB port.  The power and volume buttons are very clicky and durable.  On top is a slab of black glass that hides an IR transmitter so you can use the One M9 as a remote for your television.

HTC One M9 right side

HTC One M9 in hand

Oh and I’m a huge fan of the dual-tone aluminum.  I love the gold on front and silver on back.  Again, I like color on my devices and being different.

Overall I have to recommend the HTC One M9 for its design.  Am I a bit disappointed?  Yes, however that should not deter you from grabbing one if you’re in the hunt for a new device and haven’t ever had a HTC before. 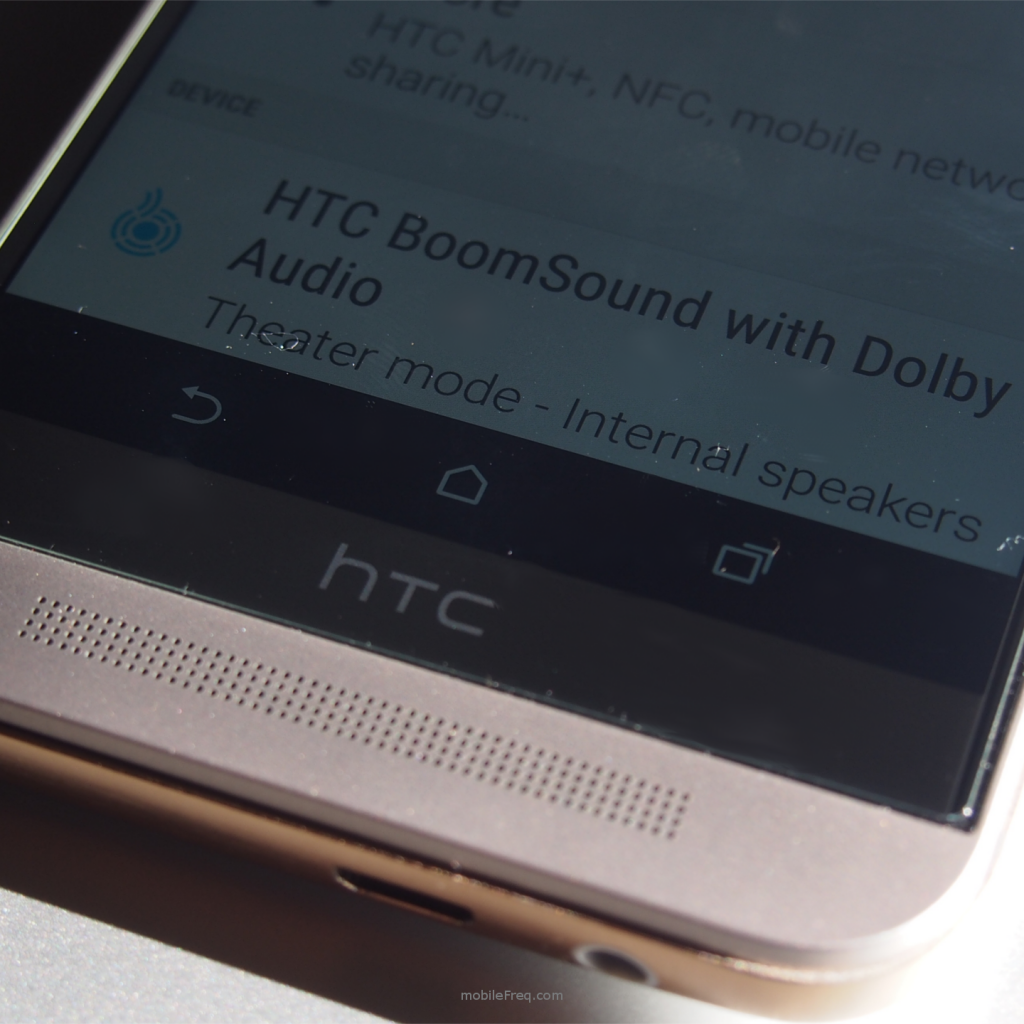 It wouldn’t be an HTC One M9 review without talking about the speakers.

The BoomSound speakers are the best on the market, period.  You will not find a better sounding device than the HTC One M9.  Sony is the only other brand that even comes close.

HTC somehow created audio nirvana with the One M7 and have only made it better since.  They are partnering up with Dolby Audio this time and I really can’t complain.  I’ve been spoiled ever since the M7.

Listening to music or watching videos on the One M9 is awesome.  It’s just awesome.

The dual front-facing speakers blast frequencies at you without any distortion.  They get loud.  They don’t crackle.  You’ll hear parts of music that would otherwise be nonexistent from competing smartphones.  The bass is tight and isn’t bloated.  It’s just pure enjoyment.

The HTC One M9 speakers are so good that they almost negate the need for external speakers.

Another great thing about listening to music on the One M9 is that the headphone amp is better than most.  If you have headphones that require a little extra push like my Sennheiser HD-25’s (high impedance), you won’t have any trouble driving them to normal volumes.

If you are a self-proclaimed audiophile (or just a music junkie) this is hands down the reason you buy an HTC One M9.  It is the gold standard for music. 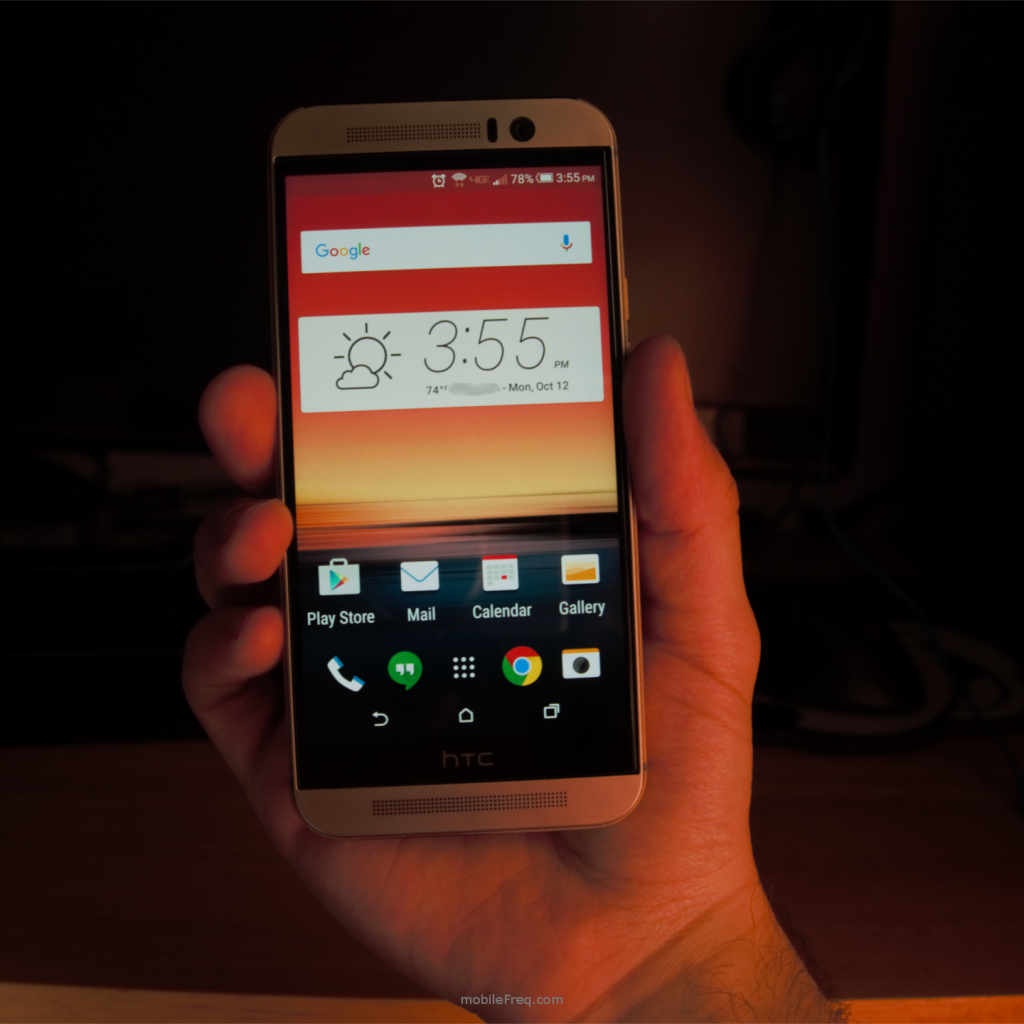 The battery is good.  Like most smartphones these days it will get you through the day on a full charge.  It also is internal so there is no luck in replacing it on your own.

It is a bit smaller than other offerings at 2840mAh, but it should not be that big of a concern.  One thing that helps is the 1080p LCD screen instead of a 1440p one.

On “normal use” I had more than enough left before I went to sleep at night.  This consisted of checking a lot of emails, texting, and occasionally browsing the internet.

On heavier use it started to show signs of needing to be charged.

Overall the battery is a bit smaller than the competition, but is still more than capable of holding its own. 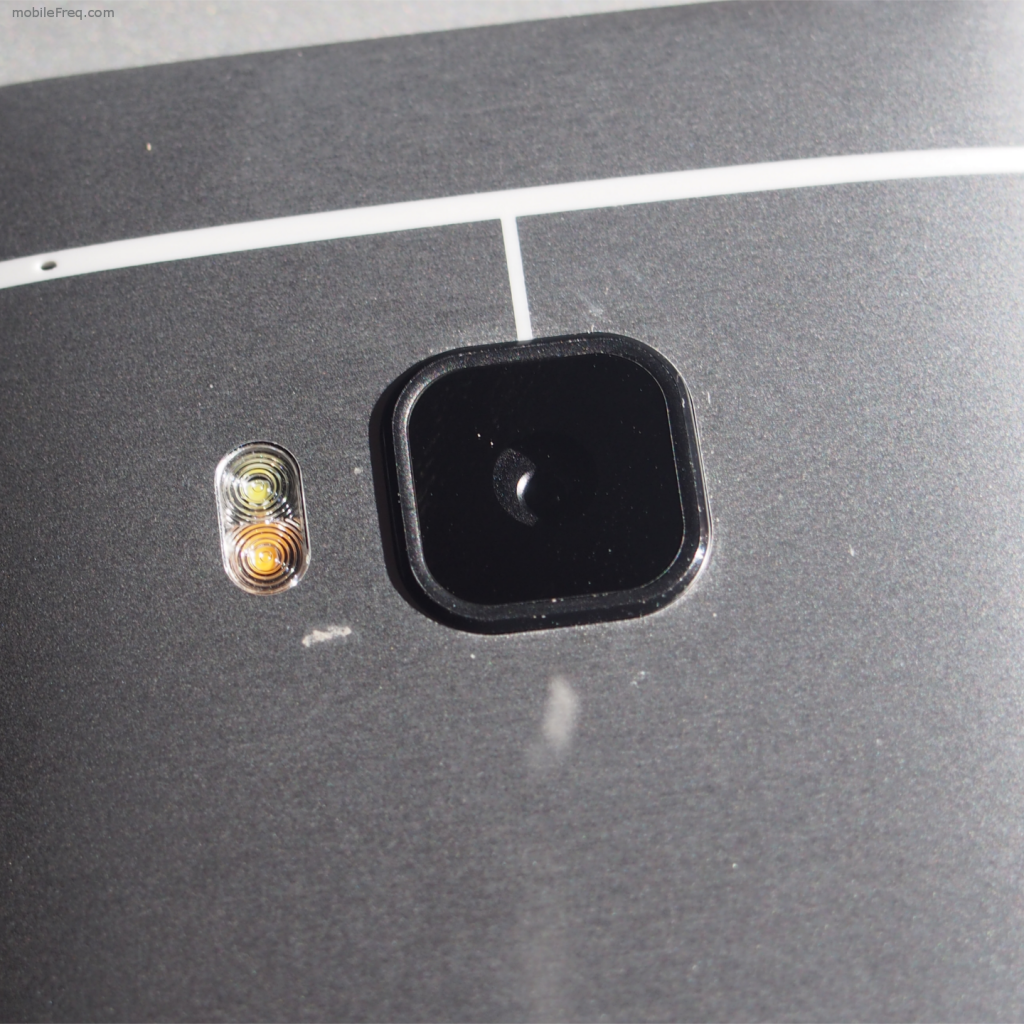 The camera is also good.  It is by no means horrible, but it also isn’t the best.

It is a 20 megapixel shooter and auto focuses pretty fast in good light.  The One M9 seemed a bit slower in darker environments which seems to still be an issue since the M7.  Thank goodness it no longer is purple hazed!  With a flash though dark environments turned out decent.

HTC’s camera app is actually organized pretty well.  It’s pretty intuitive and has just about every setting that you will need for most uses. 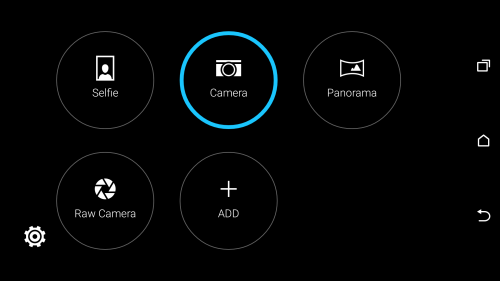 They have this feature where you can create custom “cameras” which I really liked.  Say you go to low-light concerts a lot and finally found the perfect settings to take photos.  You can save the current settings and name it “Concert” so that when you go to your next one you don’t have to waste time getting the settings perfect.

There is also the option to choose RAW output for your pictures.

If you’d like to see all 30+ pictures taken with the HTC One M9, follow the Flickr link here and see all the data that comes along with them!

Overall the camera is sufficient and will do it’s job.

HTC skins android with what they call HTC Sense.  Some people love it, some people hate it.  Out of all the skinned versions of Android, I’d have to say that HTC does it best.  I really like HTC Sense. 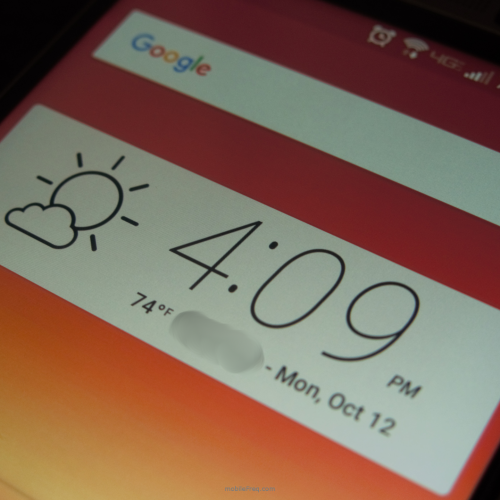 Using a HTC One M9 with Sense is very intuitive for someone coming from an iPhone or other Android device.  It is light and fast.

The settings and most menu tabs have a solid white background with easy-to-read text.  It makes Android not seem as intimidating.  Again, the One M9 is a welcoming device.

I’ve always been a fan of their weather/clock widgets and the newest ones do not disappoint.

Opening up these apps are even better.  I think the HTC clock app is beautifully simple.  It just looks good and functions well.

The app switcher is unique, but seems kind of slow.  I’ve gotten used to the stock iteration that is like a deck of cards.

Overall their skinning of Android by HTC is easy to learn and has a lot of useful features.

Octa-core processor: Will it be able to handle gaming and most day-to-day tasks?  Yes.

3GB of RAM: Will it be able to multitask and handle intensive gaming?  It does.  I did not notice any stutters.  Having a 1080p screen also helps.

32GB of storage with SD card slot:  Can I actually keep a hard copy of all my songs and take a ton of photos?  You betcha.  Long live the SD card.

2840mAh battery:  Will it get me through the day?  If you are among the group of “average” users, most likely yes.  If you are a power user, maybe not.  Might want to pick up a quick charger or a different device.

Gorilla Glass 4:  Is the screen durable?  In most use-cases, yes.  If you are a bit…rough…get a case.

5.0 inch LCD:  Probably the best-sized screen.  Not too big, not too small.  It will fit comfortably in your hand.  LCD is very bright and has nice color replication.

My least favorite thing about the HTC One M9 is…

…the design.  This is only because I have owned a One M7 and bought into the hype of several “leaked” renders of what the M9 was going to look like.  I mean realistically the design is fine and a lot of other devices don’t come close to its premium feel.  I just am a bit disappointed in it because I had hoped HTC would really keep pushing smartphone form further into the future.  I also wish they had got rid of the camera bulge and made it flush with the back.  Bring the back up a bit and expand the battery would have made this very nice.

My favorite thing about the HTC One M9 is…

…the speakers!  HTC spoiled me with amazing stereo speakers on the One M7 and I’ve been an absolute prick ever since.  If I’m going to own a phone it will have dual speakers.  End of discussion.  Thanks, HTC!

Another thing I want to point out is that the One M9 does a lot of things well.  Certain features might not be the best of the best, but it is a very well-rounded device which gives it the most strength.  When the design is the only thing that is disliked the most, you know they did something right with everything else. 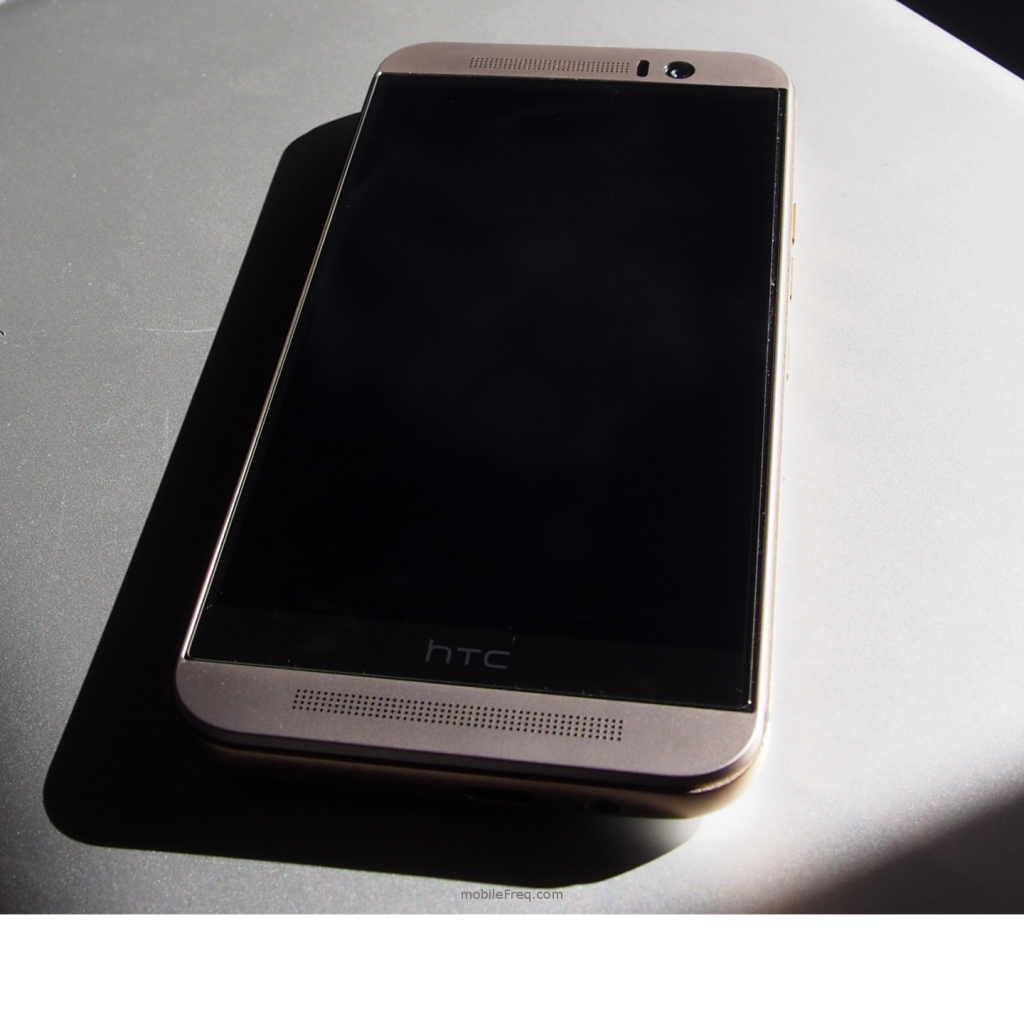 This is a bit of a tough question.  The A9 just came out and I have no idea if any prices will be changing soon.  If you can find a deal that you cannot resist then go for it.  It is a an all-around good phone that should last you two years.

If you are coming from iPhone this would be one of my top three choices along with the LG G4 and the Sony Z3/Z5 (assuming you can find one).

If you are coming from Android, it is hard to say.