Sometimes after a long day at the office do you feel like shooting orcs with arrows?

Well I’ve got good news for you!

Today’s Tappday review features a game called, “Archer’s Revenge” developed by, Leonid Peancovschiand, and you can shoot all the orcs you want. 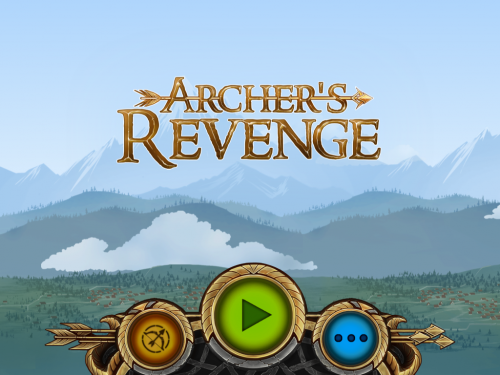 The main menu is wicked easy to navigate.

The game is pretty simple.  You play as a stationary archer and have to shoot arrows at an orc army.  Some of the enemies are also stationary while others may charge at you.  There are times when you may feel claustrophobic.

I don’t think there is anything wrong with that because I feel like the demand for these types of games will never really diminish.  There will always be a few unique concepts that make each game stand out.

One of those unique concepts in Archer’s Revenge is the reload mechanism.  Instead of being able to rapid fire arrow after arrow, you have to wait for your archer to reload the bow.  I like this idea because it makes the game a bit more challenging.

The reload time is indicated by a yellow wheel above your character’s head as seen in the gif below.

You can also see the firing mechanic in the gif is pretty much like any other projectile-based game.  If you “pull” back more, the resulting shot will do more damage because it is fired at a higher velocity.

Another interesting concept are the power pickups for things such as health.  Think of it like Worms Armageddon.  Again, it is challenging because you have to fire an arrow at the pickup to acquire it, but you may waste an arrow to do so.

Yeah, you only get so many arrows per round.

This made me start to pull some hair out of my head because I didn’t realize that you want to make sure to hit each orc with as much power in each shot as possible.  It isn’t a simple hit and kill.

This may be the only real critique of the game.  The health bars above the enemies’ heads are kind of difficult to see.  Maybe it is the green color against the backdrop.  Maybe the bar just isn’t big enough.  It does not alter gameplay at all, it is just something that you need to be aware of while playing.

Before you get to playing, you can choose between one of three characters.  Each of these characters have different archery stats broken up into four different categories.  I’m not quite sure what each stat is based off of the icon alone.  I have a general idea, but it would be nice if I could tap on the icon and it would show exactly what it means.

Archer’s Revenge runs incredibly smooth on my iPad Mini 2 with iOS 9.2.1.  I really appreciate that.

I also appreciate that there aren’t any in-app purchases or advertisements.  I am always more willing to spend $1-2 on a game like this.  Kudos to their dev team.

Now you can “buy” different bows in the game to equip, but it uses coins that you earn while playing the game.  Do not worry about having to pay-to-play.

A few remaining thoughts about the game to wrap up this Tappday review.

First, the game looks gorgeous.  I really like the artwork.

Next, I hope that in future updates more levels will be added.  Forty is plenty to begin with, but to keep the replayability high I’d like extra levels.  Also having the option to reset the game to the beginning would increase replayability.

Finally, I think extra unlocks would be a lot more fun than just a bow.  If you could use the gold coins to buy a limited number of specialty arrows or armor for one round I would love that.

Overall it is a solid and smooth game that I feel is worth the download.  It will be staying on my iPad indefinitely.

Thanks again to Leonid for reaching out to me to review his creation and providing me with a promo code.

Archer’s Revenge only costs $0.99 on the Apple App Store and is available on iPhone and iPad.

Ease of use: Medium

Sometimes after a long day at the office do you feel like shooting orcs with arrows?...