The build number is 14267 and is only available to Windows [Phone] Insiders who opted-in to the ‘Fast ring’ on their device.  It is the first preview released in 2016.

This preview is available to the list of supported Microsoft devices here.

Aul said that, “We plan to expand from there as we release Windows 10 Mobile to other devices.”

The first update was improving music search within Cortana.  A little music icon will now show up in the top right corner of Cortana.

Listening to music is easier for you and Cortana

When you click on the icon it will allow Cortana to start listening to the music and determine what is playing.  It is much like the Shazam app available on Android, iOS, and Windows Phone.

The next update is the ability to use Word Flow within the Edge browser’s address bar.  Word Flow is Microsoft’s version of Swype Keyboard.

Private browsing got an update in this build as well.

“[W]e received feedback from Windows Insiders that the InPrivate feature was either hard to find or missing on their phones,” said Gabe Aul.  “As a result, we’ve moved the button to create a new InPrivate tab to appear right next to the new tab button.”

The Edge internet browser also got a new prompt allowing you to cancel downloads if you accidentally tapped something you did not want to.

Gabe Aul listed the fixes to the previous Insider Preview Build which you can see below. 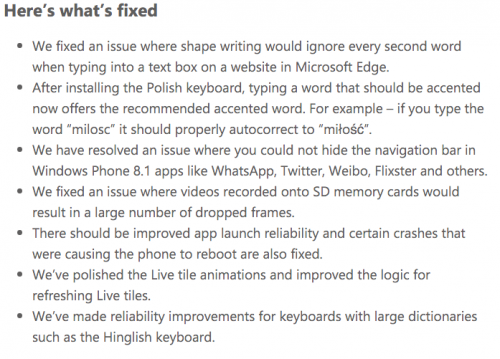 Finally, Gabe goes on to mention one known issue with the latest build that they plan on getting fixed for the next released.

The glitch in question is that the Visual Voicemail notification and delivery system is not working properly.  Users still can receive voicemail and check theirs by calling the service manually.

If you would like to receive Windows 10 Mobile Insider Preview builds, click the link here and follow the instructions.  It is free and easy to register, but will void your warranty because it has the potential to brick your device.

Thanks for the info, Gabe.