Yesterday we got to finally see what HTC plans on offering consumers this year as their flagship device.  That device is the HTC 10 which is currently running the gauntlet of internet reviews.

We do not have an HTC 10 in-house at the moment so a full-fledged review is not really appropriate until we get our hands on one.  So to keep you occupied with some content here is our rapid reaction to the HTC 10.

I am so happy that more and more Android manufacturers are continuing to embrace SD card support!  For those of us who prefer physical storage instead of streaming content, we are in luck.

The base storage is 32GB, but only 23GB of that is available to actually use.  Popping in a 128GB SD card for dirt cheap will make this a very favorable device.

It seems that 1440p screens are finally the standard resolution for smartphones.  The 10’s display is made of curved Gorilla Glass 4 so it should be more than durable for everyday encounters.

While the 5.2 inch size borders on being just too big, I do not find it to be enough of a negative.

I also prefer LCD displays to AMOLED.  To me they seem easier on the eyes. 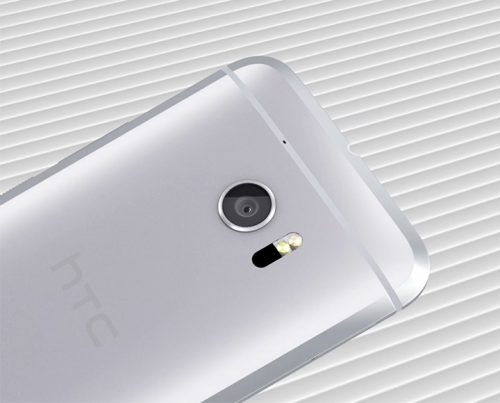 HTC really upped the ante in the camera department this year.  According to DxOMark testing the HTC 10 ties with Samsung for best mobile shooter.  You can put however much faith into those tests that you like, but it should hint that HTC did make significant improvements to the camera this year.  Maybe they figured out how to optimize the sensor.  Who knows.  What I do know is that we plan on taking as many real life pictures as we can so viewers can be the judge.

What we cannot ignore though is the introduction of Optical Image Stabilization (OIS) in both the front and back camera.  With OIS, pictures should be a lot clearer.  Motion blur should be a thing of the past even if you are taking a picture with hypothermia.

I love how they kind of went back to their roots with the HTC 10.  The back of the 10 just screams “I resemble my grandfather, the One M7, and I am proud of that!”

It looks wicked sharp.  I really like those chamfered edges.

I also like that the fingerprint scanner is absent from the back of the device.  It just seems…odd… on the Nexus 5X and 6P.  I feel like the best location is on a side power button like the Sony Z5 though.

You can get one free screen replacement should you drop your 10 and crack it during the first year.  It also covers water damage.  It also also covers UNLOCKED BOOTLOADERS.  I repeat, if you happen to be a power user and unlock the bootloader your HTC 10 is still under warranty.  Wow.  Good job HTC.

Ok this kind of a weird positive because I first want to be able to put this to the test.  I will trust HTC is marketing the battery life accurately, but we shall see.  It only comes with a 3,000 mAh battery which seems low by 2016 standards.  Hopefully this is more than enough.

What is so great about the USB port?  Good question!

For starters Type-C is finally becoming the new standard.  It is a reversible port so it does not matter which way you plug the charger in.

Headphones in the box

Depending on where you buy it, your HTC 10 may come with a set of headphones in the box.  Not the typical ones you could find in an aisle at CVS.  These apparently are nice ones that should suffice for the majority of users.  Think Apple earpods, but from HTC.

HTC seems to be listening to consumers.  The 10 will come with marginal “bloatware” preinstalled.  They are sticking to the core Google Play apps for the majority of the services.  Woah, that is refreshing.  Take note Samsung!

I am not the first to say it, but the HTC 10 looks an a lot like a Samsung Galaxy S5,6,7.  If you think I am wrong well then the fingerprint scanner does not do it justice.  Again, I feel like they could have thrown it on the side with the power button like the Sony Z5.  They could have then innovated a bit more on the front.

It just does not stand out to me.  If you threw it in a pile with a bunch of Samsung devices and maybe a few Huawei’s I probably would not be able to find it.

Capacitive buttons are also coming back.  Good gosh why.  I thought we were done with them at this point.

Gone are the iconic BoomSound stereo speakers on the front of the device.  This is sad. 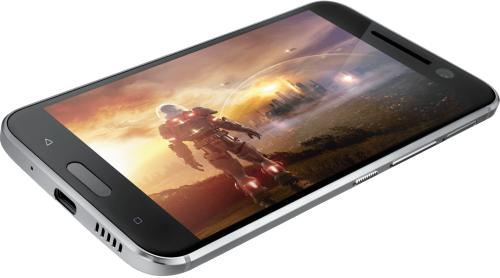 The HTC 10 has a woofer and tweeter speaker

I have a certain affinity towards stereo speakers on a phone.  My current Sony Z3V is an example of this.

We will have to wait and see how their new speaker setup fares.  Hopefully HTC can prove itself by blowing me away again like the One M7 did.

Apparently the HTC 10 has an IP53 rating meaning that it is almost dust tight, but can barely survive any sort of water application.  It might even be vulnerable in a light rain.  C’mon it is 2016.  Every phone needs to be at least IP68 rated like several current flagships.

$699 off contract.  That is kind of steep.  Yeah I know it is a flagship, but boy it could be tough to attract new consumers.  Maybe $100 off of that would be more manageable.  It is a tough situation for HTC.

The release of the HTC 10 is all over the spectrum.  Literally.

AT&T will not carry it.  Sprint, T-Mobile and Verizon Wireless will.

Color choice will also be dependent on market location and carrier.

Preorders have already started, but will not ship until early May.

This seems quite different from the HTC a few years ago that had the One M8 available in store the same day it released.

So that is our Rapid Reaction to the HTC 10.  Hopefully we can get our hands on one some time soon.

What do you think so far?  Are you excited for this device?  Have you already preordered it or are you waiting on more reviews to come out?

Let us know in the comments below.

Yesterday we got to finally see what HTC plans on offering consumers this year as...