A few days ago the United States Court of Appeals for the District of Columbia Circuit ruled that internet service providers are considered to be utilities.

The 2-1 ruling in favor of Net Neutrality means that internet providers like AT&T, Verizon, and Comcast cannot block or throttle data for arbitrary reasons.  All content and data is to be treated equally.  For example they will not be allowed to intentionally slow down video streaming services like YouTube, Netflix or Twitch.

AT&T did not have much to say other than they are already planning on appealing and taking the case to the Supreme Court. 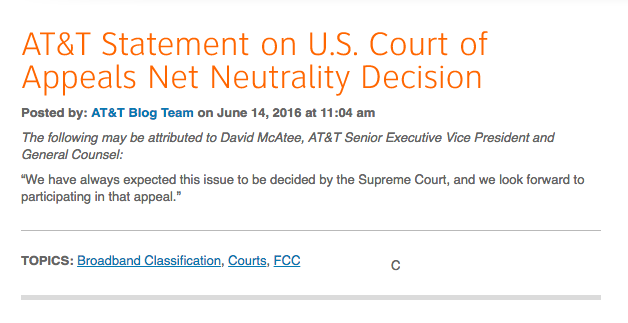 As you can see their official statement is rather short and to the point.  They do not seem to be pleased with the ruling.

In case you need another analogy for Net Neutrality consider another public utility: landline telephone service.

Say your grandmother in California has Time Warner for her phone/internet/cable provider and you are in Pennsylvania with Comcast.  Comcast cannot block you from calling your grandmother even though she is subscribed to a different provider.  Comcast also cannot interrupt or degrade the quality of your phone call to the point where you can barely understand your grandmother on the other end of the line.

So for the time being this is a big victory for the FCC, Net Neutrality and most importantly the consumers.

AT&T brings WiFi calling to some of its devices

A few days ago the United States Court of Appeals for the District of Columbia...